What was the institution of slavery in the South that is so quickly condemned by the self-proclaimed defenders of the Rights of Man?  It is a complex thing, brought together from the inweaving of a series of events and circumstances particular to Dixie, and by no means the morally simplistic outrage normally presented to the inquirer.

Let us start at the beginning, with the settling of the Southern colonies, when a superabundance of land presented unique challenges to the colonists.  Rowland Berthoff writes,

The easygoing land policy even tended to perpetuate the shortage of labor which it was designed to remedy.  . . .  The colonial economy obviously needed a class of immigrant laborers who could not achieve independent landownership, at least for a period of years.  There appeared very early, therefore, the seemingly paradoxical institutions, in the midst of abundant cheap land, of white indentured servitude and Negro slavery.  Actually there was no paradox:  servitude and slavery for some persons were direct consequences of the excessive opportunity for landownership which most others enjoyed.  Slavery, and with it the perpetual American dilemma of an unfree caste in a free country, came into existence precisely because from the outset America was as free a country as it was (An Unsettled People: Social Order and Disorder in American History, New York, Harper & Row, 1971, p. 40).

But contrary to present-day belief, there was little animosity between white and black in the Southland:

. . . well before the end of the eighteenth century white and black Americans were inextricably bound together in only marginally variant forms of speech, religion, and other aspects of a common culture (p. 43).

Mr. Mariner begins his work on familiar ground already plowed by the likes of Edmund Morgan and T. H. Breen.  He accepts the thesis that Virginia in the seventeenth century was a society with slaves, but would slowly develop into a slave society by the middle of the eighteenth century. Yet, even as the legal status of African American slaves became that of chattel, and the liberty of free African-Americans came under greater and more onerous legal restriction, the reality was far “less fixed, much more muddled and fluid.”  For example: slaves received and owned property granted to them by their masters, slaves often were allowed to hire themselves out and keep a portion of the wages, slave resistance was significant in both passive and more violent forms, and segregation was virtually nonexistent.  But, dear reader, there is more.  To quote Mr. Mariner,

Yet there is still more.  African Americans successfully sued for their freedom in the county and magistrate courts.  (These findings lend support to the recent findings of Professor DeRosa regarding slave standing and litigation successes in local, county, and state law courts.) The suits became more frequent through the eighteenth century.  As a result, Virginia’s law makers passed a law requiring all such suits by African Americans to be in forma pauperis, that is the plaintiff had to employ local counsel and damages awarded could only total one cent.  Nevertheless, the number of such suits increased, and in some cases Mr. Mariner found that the in forma pauperis provision was ignored.

There were more than enough brutes who treated their slaves badly, but the overall ethos of the institution of slavery in the South was very much akin to this:

As the proslavery divines and serious Christian laymen acknowledged, [the Bible] also specifies the master-slave relation as a trust to be exercised in accordance with the Decalogue, the standards of the Abrahamic household, and the teachings of Jesus.  The Southern divines had their work cut out for them, for they could hardly deny that Southern slavery, as legally constituted and daily practiced, fell well short of biblical standards.  Accordingly, when they rallied their people to secession and war, they did not blithely assure them of a God-given victory.  Instead, they warned that, to retain God’s favor in a holy war, Southerners would have to prove worthy of His trust, specifically, of the trust He had placed in them as Christian masters.  Hence, the divines called for repentance and reform.

Principal church leaders—Calvinist and Arminian, theologically orthodox and theologically liberal—agreed that God, in sanctioning slavery, commanded masters to follow the example of Abraham and to treat their slaves as members of their household and as brothers and sisters in the eyes of the Lord.  Two questions haunted the sincere Christians among white Southerners:  First, did not the actual conditions of slave life in the South significantly lapse from biblical standards?  And second, would not the changes necessary to bring Southern slavery up to biblical standards in fact replace slavery with a markedly different form of personal servitude?  These questions kept surfacing even in the texts of those who seemed chary of raising them directly.  Prominent Catholics and Jews joined Protestants in upholding the biblical sanction for slavery while they complained that Southern slavery fell short of biblical norms (Eugene Genovese, A Consuming Fire: The Fall of the Confederacy in the Mind of the White Christian South, Athens, Ga., U of Georgia Press, 1998, pgs. 5-6).

Is this really the epitome of evil?  The forerunner of Nazism as Dinesh D’Souza claims, and other such charges?  It is not.  Slavery in the South was an expression of her commitment to the social norm of hierarchy, the reverence for which was with her from the start, before African slaves even arrived in Dixie.  Her defense of slavery was part of her defense of hierarchy overall.  Robert Lewis Dabney put it this way:

The rest is at https://usareally.com/2314-slavery-in-the-south .

Anathema to the Union!
Posted by Walt Garlington at 6:49 PM No comments:

On the First Day of Solstice, the Glob’lists Gave to Me . . .

. . . a unicorn that defecates glitterish poo.

Western degeneracy is on mighty powerful display this Christmas in England, as this sort of ‘toy’ is one of the most ardently desired by many folks:

. . . what started as a hipster craze has filtered down to children's toys, as unicorns are for the first time predicted to dominate the list of most sought after toys for 2018.

Unicorn-themed toys look set to take over family homes this Christmas as they make up a third of those on Argos's top 10 toy list for 2018, the retailer has revealed today.

This year's "must haves" include a giant plastic sit-on unicorn which travels at adult's walking pace, interactive unicorns, and a model which poos out glitter.

At £49 Poopsie Unicorn Surprise is a far more affordable - but also potentially messy option. It is quite literally a unicorn that poos glitter.

It looks set to be a major hit as it combines all of 2018's biggest trends (slime, glitter, unicorns and poo).

Poopsie comes in four different colours and is complete with a unique bottle, glitter and a white powder which when combined together and fed to her forms the glittery unicorn poo.

It doesn’t have to be this way.  The only options, to borrow an idea from Fr Andrew Phillips, are not Western consumerism/nihilism (which includes the secularizing tendencies of Roman Catholicism and Protestantism) and Islam.  The West may still return to the Orthodox Church of her forefathers.  But pride and the spiritual blindness that comes along with it are strong foes to overcome.

Anathema to the Union!
Posted by Walt Garlington at 1:59 PM No comments:

If the Elite get their way, the whole atmosphere of the earth may soon get blanketed in sulfate aerosols to combat ‘climate change’:

Sulfur compounds are a curious choice.  Mike Adams explains some of the physical negative side effects this kind of spraying could have (acid rain, etc.) in his Natural News article linked just above, but it is the esoteric aspects that are also alarming.

Sulfur is used amongst magick practitioners for things like protection and for breaking spells:

In alchemy, sulfur is used as part of the process of transforming base matter to gold:

In the first century B.C. we find new types of heating vessels referred to and even depicted in Greco-Egyptian documents.  One such vessel was the kerotakis  . . . .

At the bottom of the cylinder was a wood or charcoal flame that heated a mass of mercury or sulphur located on a platform partway up the furnace, the whole apparatus being closed rather than open to the air.  Fumes from the heated mercury or sulphur rose up through the holes in a metal plate that lay flat across the lip of the cylinder.  Over the metal lid was placed a bowl, and within the upper chamber was put a chunk of silver or some other ore with precious metals hidden within.  The result of this metal cooking operation is interesting:  First the mercury or sulphur fumes cause the ore above to blacken with oxide, then to turn white as the mercury accumulates on the metal’s sur-face, and finally, as a third stage in the transformation, the ore turns yellow as the gold and/or silver in the chunk bonds with the particles of mercury on the metal’s surface (James Kelley, Anatomyzing Divinity: Studies in Science, Esotericism and Political Theology, Walterville, Ore., Trine Day, 2011, pgs. 13-4). 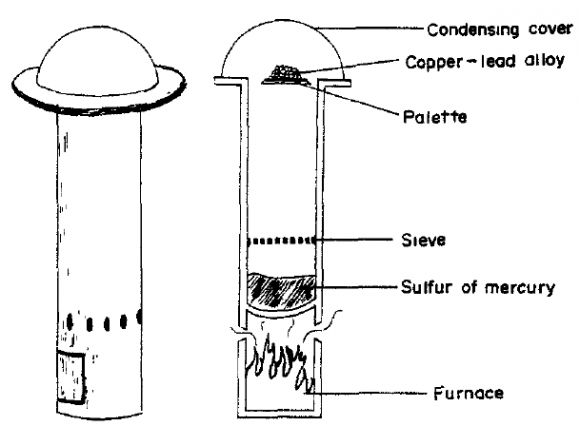 --A kerotakis, which the Elite wish to turn the whole Earth into, https://francis.naukas.com/2009/06/03/maria-la-judia-la-quimica-y-el-bano-maria-en-la-biblioteca-de-alejandria/

It is important to note here that the Elite are not scientific rationalists.  That kind of scientism is an ideology they have crafted for the masses to destroy belief in traditional religious systems, particularly Christianity.  They themselves are thoroughly steeped in occult religious beliefs and practices like Kabbalah, alchemy, etc.  So when we read of a plan such as this one involving the worldwide spraying of sulfur, we must look beneath the outer explanations to the deeper spiritual meaning of it.  And in this case, it does not seem unreasonable to conclude that if the Elite go through with this, something much larger is looming over the horizon for the people who survive this sulfur bath.  It is as though the Elite are preparing the world for a large-scale spiritual transformation, a place in which the demons will feel quite at home (let us simply recall how often the smell of sulfur is associated with demonic possessions/appearances), something Michael Hoffman mentions in his book Secret Societies and Psychological Warfare, and which Mike Adams also senses, as he spells out at the end of his article.

May God help us, through the intercessions of the holy saints and angels of Heaven, though we have shown ourselves to be unworthy of any mercy (just as He did at the Enfleshment, when we were dead in our sins).

Anathema to the Union!
Posted by Walt Garlington at 7:00 PM No comments: