Escaping the Empire: Recovering the Past So That ‘It Might Be Otherwise’, Part II


Until the South welcomed more worldliness into her borders these last few decades than she had heretofore, she had done fairly well at keeping the past in the present, at remembering:  from family stories and folk tales/wisdom to classical learning.  Especially has she been fond of the Bible.  This love has done her much good, but not as much as it could have.  Lacking the right supports, it has been for most Southrons more of a manual of proper outward behavior (John Boles, The Great Revival: Beginnings of the Bible Belt, Lexington, Ky.: Univ. Press of Ky., 1996, p. 193) than of a means to union with God - an idea Protestant theology will not allow (nor Roman Catholic).

What she is missing is the presence of holy men and women - saints - who are living testimonies to the power of God spoken of in the Holy Scriptures to make us new creations in Christ.  These are they who manifest the Gospel teachings most fully in their lives, who are as it were new incarnations of Christ in the world, who help us understand the teachings of the Scriptures by their counsel, for they are full of the Holy Spirit.

Sundered from the Orthodox Church, wheðer the South remains primarily Protestant or converts to Catholicism, she will continue to be a dry and barren land for the cultivation of true holiness, of saints.  She will remain rooted in the rocky soil of religious systems created by mere man:  by the Bishop of Rome in the 11th hundredyear, or Calvin in the 16th, or Campbell in the 19th, etc.  Shorn of good roots, her soul will continue in its deformed state, unable to keep the fullness of the Church’s past with her in the present.

However, she may still choose the better way, the Orthodox way.  Then she will see and understand how important the saints are to our well-being in body and soul, how ever-present they are with us, how timeless are their teachings, how undying is the Orthodox Church’s memory of them and gratefulness towards them, how mightily the Holy Trinity works through them, how wonderful He is in them!

Only when this time comes, when we know þe fullness of the Grace of God, will the South’s religious life blossom in all its beauty.

For an ensample of all this, of how it might yet be here in the South, we offer the life of our Holy Father the Venerable Beuno, who enlightened many of Dixie’s forebears in southwest England and who has never ceased to offer his help to those who trust in him as an intercessor before Almighty God.  Halig (Holy) Beuno, pray to God for us sinners at the South! 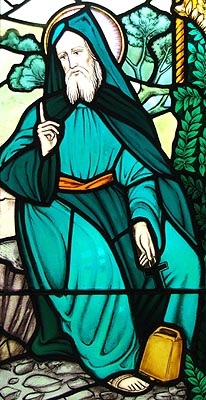 Of the life of Venerable Abbot Beuno, probably the greatest saint in North Wales, we know very little. His Life was written many years after his repose, but even the bloody 16th-century Reformation could not erase the memory of this saint of God. Our holy father Beuno was born in the second half of the 6th century in the Welsh kingdom of Powys (according to another tradition – in the present-day western English county of Herefordshire, which at that time was part of Wales) and most likely was a grandson of a Welsh prince. As a young man, Beuno was taught in Herefordshire and learned the monastic life in the famous Bangor Monastery that had been founded by the holy Bishop Deiniol of Bangor (today the village Bangor-on-Dee in the Borough of Wrexham in north-east Wales).

In about 616 Beuno founded his main monastery at Clynnog Fawr in the historic region and modern county of Gwynedd in northwest Wales. Owing to the tireless labors of the monks of Clynnog Fawr, most of North Wales was enlightened with the Gospel. Beuno was ordained priest at Bangor and then was invited to become its abbot. In all the venerable man established no fewer than nine monastic centers in Wales and all of them became famous. According to popular tradition, Beuno was the uncle, spiritual father and patron of the holy martyr Winifred, whose veneration throughout the Middle Ages was great. Her relics were in Shrewsbury in England and her wonder-working well at Holywell in Wales has been a focus for continual pilgrimages for 1350 years. 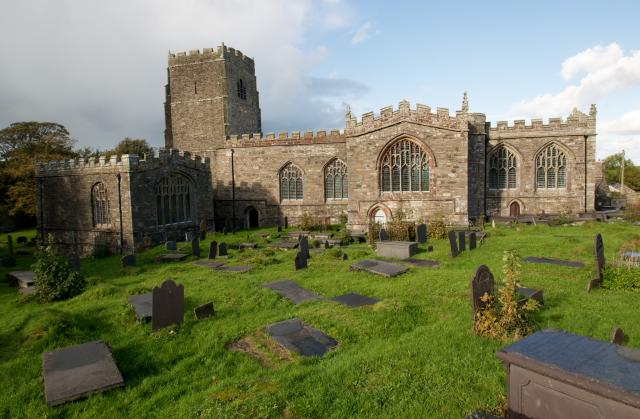 St. Beuno's Church in Clynnog Fawr, Gwynedd.
It was said of Beuno that he was stern with stubborn sinners but was full of mercy and compassion for penitents and those who suffered. Towards the end of his life, Beuno was rewarded by the Lord with the gift of discernment and was able to penetrate into the depths and mysteries of the spiritual world. Throughout his life, Beuno worked numerous miracles of healing. He was also a very active and extremely successful missionary, his preaching of the Word of God reached many corners of Wales and south-west England. Among the contemporary theologians Beuno was famous for his knowledge of the Holy Scriptures.
The saint reposed peacefully a few days after Easter Sunday 640 (or 645) in Clynnog Fawr as a very old man. For most of his very long and fruitful life this holy man had wandered much, everywhere preaching the words of Eternal Life, founding monasteries, healing the sick and consoling the destitute, the suffering and those who had been forsaken by others. Frequently he retired to very secluded places for solitary prayer. Beuno established monasteries in Llanveynoe in Herefordshire in England (the Welsh form: Llanfeuno, “Church of Beuno”) and in Llanymynech. To this day there is a unique village called Llanymynech which is partly situated in Wales (Powys) and partly in England (Shropshire). Ancient traditions say that Beuno, as a wandering preacher, used to pay visits to the monastic islands in Wales at Bardsey and Anglesey. On Anglesey he may have founded a church, or, most likely, a monastery, in a place called Aberffraw.

Apparently Beuno for some while led a solitary ascetic life in Somerset in southwest England where a tiny and lovely church in Culbone – which stands to this day – served him as a cell (hence its name: cell = kill = killbeuno = Culbone). This is the smallest active parish church in all England. It is dedicated to St. Beuno who has been its patron for many centuries. This is a fine example (as well as the neighboring early English Church of St. Dubricius in Porlock) of an early hidden Celtic shrine in England and indicates the uninterrupted tradition of holiness. It is believed that it served Beuno as a cell and after his repose was converted into a chapel. Culbone church is located in a very quiet and remote place right beside the Bristol Channel, surrounded by nature, forest, pastures and small farms. Nearby is the steep Porlock hill and other high hills (typical for Somerset). The views are breathtaking and as you walk it seems that the sea merges with the sky and worldly civilization is far away. This is a typical setting for the ancient Celtic saints.

After his repose, Beuno was buried in Clynnog Fawr, and soon a chapel was erected above his grave. A great number of miracles occurred at his holy relics. Later the saint’s remains were translated to a new church where many miracles continued to occur. The veneration for Beuno was so strong that it even continued after the disastrous Reformation under Henry VIII, when all over Britain monasteries were closed, icons, relics and other holy objects were destroyed and the veneration of saints was officially prohibited.

Until the early 19th century there was a custom among the farmers in the vicinity of Clynnog Fawr to make donations to St. Beuno’s Church in the form of young lambs and calves on the feast of Whitsun (Trinity Sunday), as well as to lead sick cattle to the neighboring holy well dedicated to St. Beuno. There are records of countless cases of healing of sick domestic animals on that holy site. From the late medieval era, Clynnog Fawr church regularly celebrated a special service of intercession for the health of livestock. Children who suffered from many diseases – both before and after the Reformation – were brought and led to the holy well, bathed in it and left for a night inside the chapel on the grave or near the grave of the holy man; and many of them were miraculously cured. In most cases children and young people who had suffered from rickets and epilepsy left this place absolutely healthy.

There is written evidence that in the 18th, 19th and 20th centuries people were healed from many ailments on bathing in this sacred spring. St. Beuno is considered to be the patron of sick children and sick cattle in Wales to this day. Beuno’s well at Clynnog Fawr still remains a destination for pilgrimages today, even though it was partly damaged by vandals in 2010. There is another holy well dedicated to Beuno in Holywell, Flintshire, situated close to its far more famous neighbor – the well of Beuno’s niece St. Winifred. From this well there begins a heritage route devoted to St. Beuno. There is an ancient and now unused church of St. Beuno and a well associated with him at the foot of a hill in the village Carnguwch, Gwynedd.