The Legend of Zelda: You Are Being Initiated


(In light of the arrival of The Legend of Zelda: Breath of the Wild for Nintendo’s new Switch console, here are some initial thoughts on the series as a whole.)

Nintendo’s The Legend of Zelda series is defined by the idea of the labyrinth.  Both the overworld and the various temples, dungeons, etc. serve as labyrinths.  But a labyrinth has a specific purpose:  to initiate those who are worthy into the inner mysteries or beliefs or ways of a group of people, usually a religious group. 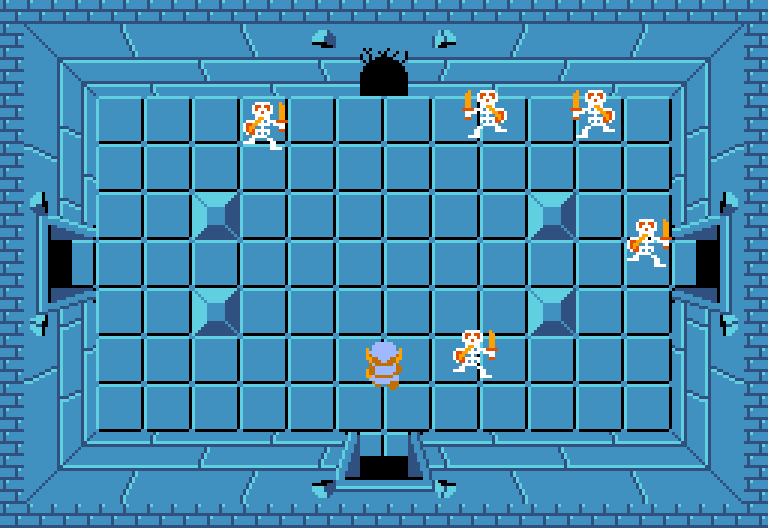 ‘Which way to go?’  From https://www.zeldadungeon.net/the-legend-of-zelda-walkthrough/level-1-the-eagle/, 17 March 2017

On its surface, Legend of Zelda is an adventure game wherein the player saves a princess and her kingdom from an evil usurper and his minions.  Beneath this outer layer, it seems more than likely that this series of games (particularly those in the main canon of the games where Zelda, Ganon, Link, and the Triforce are involved) is Gnostic theology dressed up in fictional form.

Let us run through some of the basics of the heresy of Gnosticism first and then see how they are presented in LoZ.

In many Gnostic systems (and heresiologies), God is known as the Monad, the One.[note 13] God is the high source of the pleroma, the region of light. The various emanations of God are called æons. According to Hippolytus, this view was inspired by the Pythagoreans, who called the first thing that came into existence the Monad, which begat the dyad, which begat the numbers, which begat the point, begetting lines, etc.

Almost all Gnostic systems of the Syrian or Egyptian type taught that the universe began with an original, unknowable God, referred to as the Parent or Bythos, or as the Monad by Monoimus. From this initial unitary beginning, the One spontaneously emanated further Aeons, being pairs of progressively 'lesser' beings in sequence. Together with the source from which they emanate they form the Pleroma, or fullness, of God, and thus should not be seen as distinct from the divine, but symbolic abstractions of the divine nature. The transition from the immaterial to the material, from the noumenal to the sensible, is brought about by a flaw, or a passion, or a sin, in one of the Aeons.

In most versions of the Gnostic mythos, it is Sophia who brings about this instability in the Pleroma, in turn bringing about the creation of materiality. According to some Gnostic texts, the crisis occurs as a result of Sophia trying to emanate without her syzygy or, in another tradition, because she tries to breach the barrier between herself and the unknowable Bythos. After cataclysmically falling from the Pleroma, Sophia's fear and anguish of losing her life (just as she lost the light of the One) causes confusion and longing to return to it. Because of these longings, matter (Greek: hylē, ὕλη) and soul (Greek: psychē, ψυχή) accidentally come into existence. The creation of the Demiurge (also known as Yaldabaoth, "Son of Chaos") is also a mistake made during this exile. The Demiurge proceeds to create the physical world in which we live, ignorant of Sophia, who nevertheless manages to infuse some spiritual spark or pneuma into his creation.

In the Pistis Sophia, Christ is sent from the Godhead in order to bring Sophia back into the fullness (Pleroma). Christ enables her to again see the light, bringing her knowledge of the spirit (Greek: pneuma, πνευμα). Christ is then sent to earth in the form of the man Jesus to give men the Gnosis needed to rescue themselves from the physical world and return to the spiritual world. In Gnosticism, the Gospel story of Jesus is itself allegorical: it is the Outer Mystery, used as an introduction to Gnosis, rather than being literally true in a historical context. For the Gnostics, the drama of the redemption of the Sophia through Christ or the Logos is the central drama of the universe. The Sophia resides in all of us as the Divine Spark.

From the initial unitary beginning, the One spontaneously emanated further Aeons, pairs of progressively "lesser" beings in sequence. The lowest of these pairs were Sophia and Christ. The Aeons together make up the Pleroma, or fullness of divinity and thus should not be seen as identical with God nor as distinct from the divine, but as embodied divine emanations.[citation needed]

The basic Gnostic myth has many variations, but all of these refer to Aeons, intermediate deific beings who exist between the ultimate, True God and ourselves. They, together with the True God, comprise the realm of Fullness (Pleroma) wherein the potency of divinity operates fully. The Fullness stands in contrast to our existential state, which in comparison may be called emptiness.

One of the aeonial beings who bears the name Sophia (“Wisdom”) is of great importance to the Gnostic world view. In the course of her journeyings, Sophia came to emanate from her own being a flawed consciousness, a being who became the creator of the material and psychic cosmos, all of which he created in the image of his own flaw. This being, unaware of his origins, imagined himself to be the ultimate and absolute God. Since he took the already existing divine essence and fashioned it into various forms, he is also called the Demiurgos or “half-maker” There is an authentic half, a true deific component within creation, but it is not recognized by the half-maker and by his cosmic minions, the Archons or “rulers”.

Gnosticism commonly held that "salvation is to escape from the bondage of the material existence and travel back to the home from which souls/spirits have fallen." God initiates salvation because he wants to draw back the stray bits and pieces of himself, and so he sends forth an emanation of himself - "a spiritual redeemer" - who comes down from heaven and gives an attempt to teach some of the "divine sparks of Spirit" what their true identity is and where their real home lies. Once they are awakened by this redeemer they can then begin their journey back home. "Salvation is by knowledge - self-knowledge."

Condensing this down further, we see these main ideas:

-A single god who dwells in a region of light.
-A pair of emanated beings from this god, Sophia and her consort.  Sophia is the inner life of the cosmos.
-From Sophia comes the Demiurge, who, thinking he his god, with the help of the divine essence, tries to fashion worlds, people, etc. from the material made by Sophia according to his own plans.
-Pieces of the one divine god have become trapped in material bodies and must be freed from them to be reunited with the monad.
-The other person in the aeonial pair who existed with Sophia in the pleroma of the monad comes, undoes the work of the Demiurge, and reunites Sophia and the other scattered divine sparks with the monad, thus bringing salvation to the world.

In the LoZ, these are presented in the following way.

-The Triforce, the essence of the goddesses who created the world, is left behind in the Golden Land, a land of light, to be the ruling power in the world.  It is the monad. 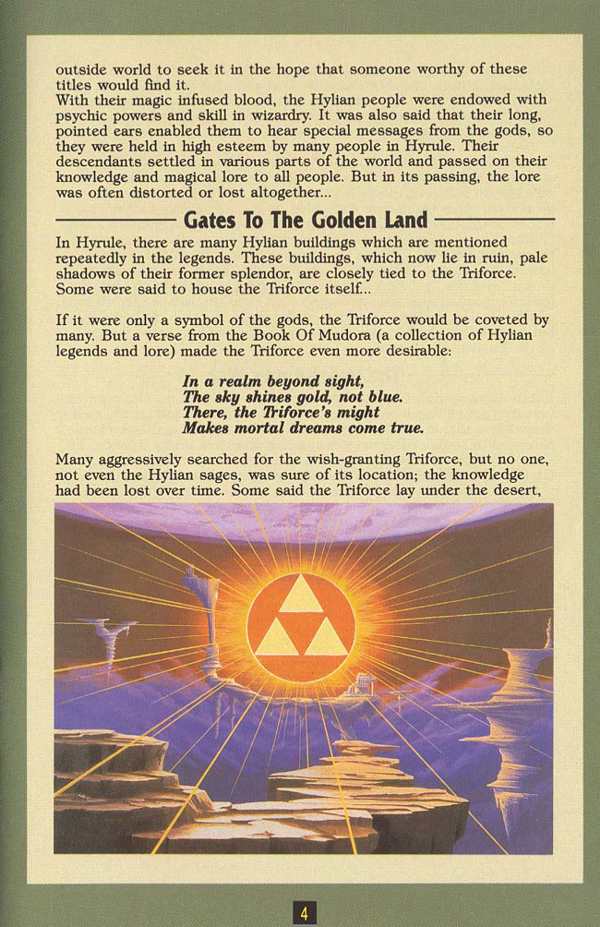 -Princess Zelda, the ruler of Hyrule, like Sophia, is a symbol of the world-soul, the one who gives life to the world.
-Ganon is the Demiurge, who, with the essence of the goddesses in the Triforce, attempts to remake and rule the world.
-Part of the Triforce is shattered, its pieces being scattered throughout the world (the Gnostic ‘sparks of divinity’), in the hopes of being found and reunited by a worthy hero.
-Link, Zelda/Sophia’s syzygy or consort, appears, reunites the Triforce shards, overthrows Ganon, and returns Zelda and her kingdom to their rightful order. 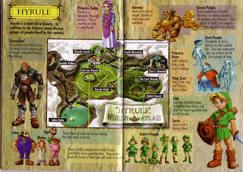 The kinship between the Gnostic system and LoZ is further strengthened by Link’s ‘descending’ oftentimes into dungeons, etc. in his efforts to reunite the Triforce pieces, just as the Gnostic savior must ‘descend’ into the material world from the spiritual pleroma to free the trapped divine sparks. 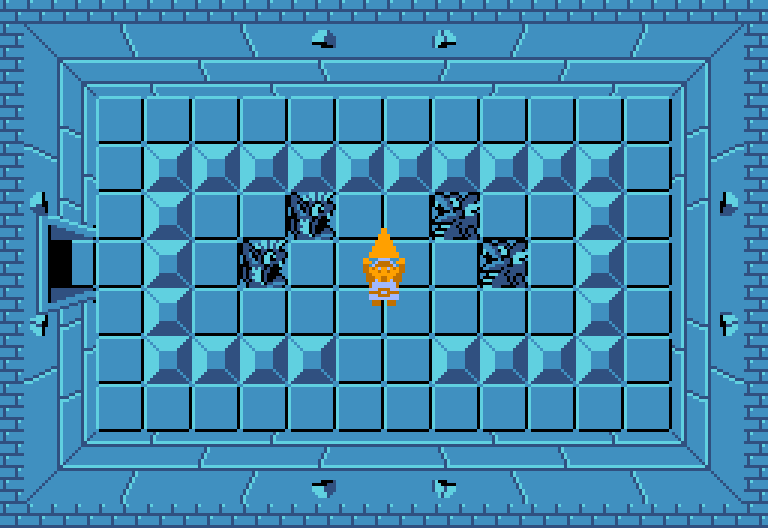 Laying hands on a divine spark of the monad, from https://www.zeldadungeon.net/the-legend-of-zelda-walkthrough/level-1-the-eagle/, 17 March 2017

As we said at the outset, the labyrinth theme dominates throughout The Legend of Zelda.  And now we can say with some confidence what its deeper meaning is:  You are being initiated into Gnosticism.

Anathema to the Union!
Posted by Walt Garlington at 5:51 PM