A time will come when there will be a spiritual flowering in Russia. Many churches and monasteries will open, even those of other faiths will come to us in ships to be baptized. But this will not last long - for about fifteen years, then Antichrist will come ...

The time will come when there will be no persecution, but money and the attractions of this world will draw people away from God and many more souls will perish than during the period of open militant atheism. On the one hand, they will raise up crosses and gild cupolas, but on the other hand, the kingdom of lies and evil will come.  . . .

It is possible we are seeing the partial fulfilment of this prophecy.  For on one hand, many thousands of churches and monasteries are being built and/or opened again, and many thousands of Russians are returning to the Orthodox Faith of their forebears:

On the other hand, part of the Russian people continue to work with the satanic Elite to construct techno-nightmare ‘smart cities’ and the like (thanks to C for the links):

So many in the world are sick unto sorrow because of the way the Globalists govern.  These captive peoples hunger for leadership to deliver them from their hands.  Russia has been providing that leadership in some important ways, but, nevertheless, she still has an internal battle to wage, it seems.  If she is to take up her role again as the Third Rome, as protector of Christians and fountainhead of true evangelism, she must fight hard, and we all must pray for her victory.  Otherwise, all is lost.

For more on St Seraphim: 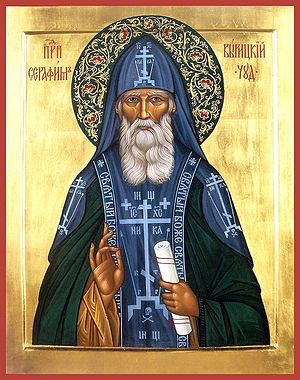 Anathema to the Union!
Posted by Walt Garlington at 6:38 PM