St Lawrence, Rome, and the South Ancient Rome has had a strong influence on the South in many ways:  statecraft, the idea of the farmer-soldier, stoicism, rhetoric, architecture, literature - to name some.  This is fine; there is much that is good in the history and traditions of Old Rome.  However, Dixie has failed to glean as much as she could from the Roman tradition because she thrown aside so much of the inheritance of the three Orthodox Christian Romes (Rome, Constantinople, and Moscow) in favor of the new-style Christianity of Protestantism.

What did each of these Romes give to the world?  Metropolitan Vitaly explains:

We say that there are three Romes. There is ancient Rome, which through its martyrs broke the iron pillar of the Roman Empire. Pagan Rome gave quite a lot to Christianity, inasmuch as it established the law and defined the human person as a legal entity; it paved countless roads; and it pacified all of Europe, uniting it into the magnificent Roman Empire, into which our Savior was born. The martyrs of the early Christian Church, who had heard the preaching of the Apostles themselves and of their disciples, accepted this preaching with such astonishing clarity that they went to their cruel martyrdoms as if joining a procession. They transformed the Roman Empire by their blood. We remember these great martyrs to this day, and will remember them until the end of the ages.

Later there was the second Rome, Byzantium, which allowed the teaching of the Orthodox Church to pass through the crucible of thought, reason, and human understanding; to this end it made use of the legacy of Greece, which from ancient times had become practiced in human syllogisms and illogisms. Its philosophical heritage was employed in systematizing the Orthodox Church’s teaching. This was the greatest achievement of the second Rome: Byzantium, Constantinople.

This is our particularity. We will enter the Heavenly Kingdom through the Mother of God. The Mother of God is always depicted with the infant Christ the Savior. This particularity of icon-painting hearkens back to an ancient tradition that tells of some freethinking and insolent people who, looking at the Mother of God during his lifetime, said: “How can she be the Mother of God? How could she have given birth to God? How is this possible?” Then the Mother of God raised her most pure hands to heaven, seeking the protection of God, just as she is depicted on the Kursk-Root Icon. Then the Lord showed Himself to these disputers of this world in her most pure womb, just as He is depicted on her icon. These cowards, seeing such an incredible miracle, were cast into the fear of God; and the insolent people, who were infected with incurable pride, fled in terror, having seen the Savior’s face as Judge in anticipation of His Second Coming.

This is our icon. With the raised hands of the Mother of God it addresses all non-believers and believers alike, that they might learn to fear disbelief. This best witnesses to our entire people that the Mother of God is truly the Theotokos, that she truly bore our God and Savior. The particular Russian piety for venerating the Mother of God is a response to the Russian soul’s age-old yearning to perceive God’s grace, which cannot be reduced to an abstract concept, distinctly and actually. The Mother of God also showed her protection to such great saints as our St. Sergius of Radonezh, to whom she appeared more than once, and in more recent times to St. Seraphim of Sarov. Recall how St. Seraphim, sitting on a log in the dense forest, revealed God’s grace to Motovilov distinctly and actually. St. Seraphim embraced him and suddenly the grace of the Holy Spirit moved from the saint to Motovilov who, perceiving God’s grace in fear and trembling, felt as though he were not on earth but in heaven.

This is what the Russian people seek: it desires to perceive God’s grace actually and completely. This is the ideal of the Russian soul.

But since the South has great affinity for Ancient Rome, let us look more closely at Christianity during the early years of the Church in Rome, during the persecutions of the pagan emperors, particularly at St Lawrence the Head-deacon of Rome and Martyr (+10 August 258).  By studying his life, the South will perhaps be able to step into the broader world of Orthodox Romanity (which is her natural home, being an admirer of things both Roman and Christian).  Here is the hymn that the Spanish poet Prudentius (reposed about 405 A. D.) wrote in honor of his fellow Orthodox Spaniard St Lawrence:

A Hymn in Honour of the Passion of the
Most Blessed Martyr Lawrence.

Rome, thou ancient mother of temples, but now
given up to Christ, Lawrence has led thee to victory
and triumph over barbarous worship. Thou hadst
already conquered haughty kings and held the
nations in check ; now thou dost lay the yoke of thy
power on unnatural idols. This was the one glory
lacking to the honours of the city of the toga, that it
should take savage paganism captive and subdue its
unclean Jupiter, not with the tempestuous strength
of Cossus" or Camillus ^ or Caesar, but by the battle in
which the martyr Lawrence shed his blood. The faith
fought in arms, not sparing her own blood, for by death
she destroyed death and spent herself to save herself.

Xystus « the priest had already foretold this when

The greatness of the Roman tradition is summed up in saints like the Martyr Lawrence.  Mark Antony’s lines in Shakespeare’s Julius Caesar ‘He was the noblest Roman of them all’ and ‘This was a man!’ more properly apply to them by far than to Brutus.  When the South learns to pray to them, honor them, and imitate them, things will go better for her.

Holy Archdeacon Lawrence, pray for us sinners at the South! 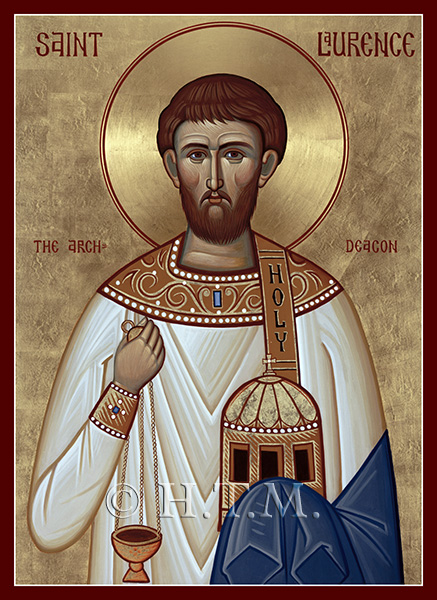 --Holy icon of St Lawrence from http://tyoos.org/Lives-of-Saints/August/Aug-10/St-Laurence-of-Rome.html by way of https://www.bostonmonks.com/product_info.php/products_id/315

Anathema to the Union!
Posted by Walt Garlington at 7:07 PM