‘I Want to Believe’ 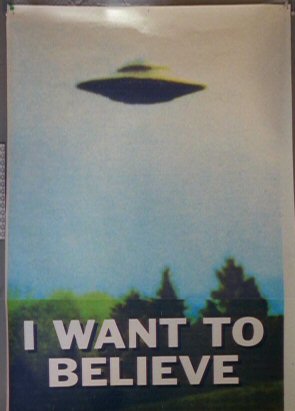 Anyone familiar with The X-Files will recognize the words of Mulder’s UFO poster, ‘I want to believe’.  They represent his ardent desire to believe in beings from other worlds and other strange creatures and phenomena, even though he has little evidence to support his belief in them.

The belief of the typical American in the blessings derived from his democratic/republican form of government is of the same type:  He wants desperately to believe that they are so, in spite of all the evidence, past and present, to the contrary.

The flaming Yankee Orestes Brownson is a case-in-point.  (We say ‘flaming Yankee’ because, regardless of his kind words for the Southern aristocracy, which we appreciate, he is still adamant that the Southern people and ‘the whole population’ of all the States be ‘Americanized’, that is, conformed to ‘the New England system, in its main features’ (The American Republic, Wilmington, Del.: ISI Books, 2003, p. 176).  This is the norm for a New Englander, as Brownson himself admits, for this kind of man is ‘always seeking to make all the world like himself, or as uneasy as himself’ (p. LXXX).)

Mr Brownson, as we were saying, early in The American Republic declares that a republican political system is a mark that a people have reached the highest levels of civilization (p. 23).  And yet later in the same book, he says flatly, ‘The ballot of an isolated individual counts for nothing’ (p. 174), and this gives rise to political parties, which ‘have no conscience, no responsibility, and their very reason of being is, the usurpation and concentration of power’ (p. 175).  He suggests that the remedy is the division of powers among the various levels of government - local, state, and national (pgs. 175-6) - but even at the town level, the ballot of one man still ‘counts for nothing’, the need to form parties thus still exists, and the same tendency to concentration of power (and abuse of power) will continue.  All this notwithstanding, Mr Brownson (and many Americans), blinded by their political ideology, still go on boasting that ‘the American constitution . . . is the least imperfect that has ever existed’ (p. 176) or that it is the one in history most in accord with Christianity (p. 268).

But this is not all.  Democracies/Republics also tend to lower the ideal image of man to the mediocre.  For this is perhaps the largest class of people in most societies, and in a land where universal adult suffrage exists, it becomes the most important class.  Therefore, the gaze of most in such a society rests primarily on them, and they model their lives after them.

Isaac Asimov well illustrated the truth of this drift toward the Mediocre Man in democracies in his short story ‘Franchise’.  In that story, the citizens of the United States of the not too distant future, having grown weary of the rigmarole surrounding local, state, and national elections, have had built a super computer named Multivac that decides who should win every one of those elections based on an interview with only one citizen who would best represent the mindset of the whole electorate.  So who does Multivac deem the best representative of the American democracy?  The genius, risk-taking, ladder-of-success-climbing entrepreneur?  The brilliant scientist with patents overflowing?  Perhaps someone more homely, like the sturdy farmer?  No, none of these.  It is instead the colorless, bloodless, lifeless store clerk, Norman Muller:

Norman Muller had a small blond mustache that had given him a debonair quality in the young Sarah’s eyes, but which, with gradual graying, had declined merely to lack of distinction.  His forehead bore deepening lines born of uncertainty and, in general, he had never seduced his clerkly soul with the thought that he was either born great or would under any circumstances achieve greatness.  He had a wife, a job and a little girl, and except under extraordinary conditions of elation or depression was inclined to consider that to be an adequate bargain struck with life (The Complete Stories: Vol. 1, New York: Doubleday, 1990, p. 44).

There is a flip side to this coin, however.  It is that mankind will never completely give up its search for and veneration of extraordinary men and women, whether saints, virtuous gentlemen and ladies, etc.  But where these are missing, a danger arises.

C. S. Lewis said of this ingoading and this danger, ‘Monarchy can easily be debunked, but watch the faces, mark well the debunkers. These are the men whose taproot in Eden has been cut: whom no rumour of the polyphony, the dance, can reach - men to whom pebbles laid in a row are more beautiful than an arch. Yet even if they desire mere equality they cannot reach it. Where men are forbidden to honour a king they honour millionaires, athletes or film stars instead: even famous prostitutes or gangsters. For spiritual nature, like bodily nature, will be served; deny it food and it will gobble poison’ (http://www.monarchy.net/Quotations.aspx, accessed 5 March 2016).

Such is progress in America.

The South in her better days has recognized these things.  On the shortcomings of elected governments, the Maryland Anti-Federalist writer, styling himself ‘A Farmer’, writing in March 1788 during the ratification debates, said of them, ‘Throughout the world government by representation, seems only to have been established to disgrace itself and be abolished — its very principle is change, and it sets all system at defiance — it perishes by speedy corruption. — The few representatives can always corrupt themselves by legislative speculations, from the pockets of their numerous constituents — quick rotation, like a succession of terms tenants on a farm, only encreases the evil by rendering them more rapacious. If the executive is changeable, he can never oppose large decided majorities of influential individuals — or enforce on those powerful men, who may render his next election [null?  impossible?  The word is missing from the surviving text.--W.G.] . . .’ (A Farmer, Essay V, http://www.constitution.org/afp/md_farmer.htm, accessed 10 March 2016).

Patrick Henry added elsewhere, during the Virginia ratification debates, ‘The honorable gentleman who presides told us that, to prevent abuses in our government, we will assemble in Convention, recall our delegated powers, and punish our servants for abusing the trust reposed in them. O sir, we should have fine times, indeed, if, to punish tyrants, it were only sufficient to assemble the people! . . . Did you ever read of any revolution in a nation, brought about by the punishment of those in power, inflicted by those who had no power at all’  (http://www.constitution.org/rc/rat_va_04.htm, accessed 10 March 2016)?

If the ballot is powerless against evil, if left to itself it in fact causes evils to spring forth, what is to be done?  We must think of how to welcome Christian, hereditary æþeldom (aristocracy) and kingship into our political order again.

Quoting once more from A Farmer:  ‘After every consideration I can give this subject, I am satisfied, that government founded on representation, indispensibly requires, at least an executive for life, whose person must be sacred from impeachment, and only his ostensible ministers responsible — A senate for life, the vacancies to be filled up and the number occasionally encreased but under a limitation, by the executive — the hand that holds the balance must have the power of adding weight and influence to the lightest scale, and of frequently removing turbulent men into an higher and inoffensive situation . . .’ (A Farmer, Essay V, http://www.constitution.org/afp/md_farmer.htm, accessed 10 March 2016).

One of the most important sayings comes from the Holy New Martyr Vladimir, Metropolitan of Kiev (+1918), and with this we shall end for the day, praying that the Souð will turn away from the idol she has worshipped for so long now:

Further thoughts on monarchy and democracy from the Fathers of the Orthodox Church:

“Monarchy is superior to every other constitution and form of government. For polyarchy, where everyone competes on equal terms, is really anarchy and discord.” - Bishop Eusebius of Caesarea

“The three most ancient opinions concerning God are Anarchia, Polyarchia, and Monarchia. The first two are the sport of the children of Hellas, and may they continue to be so. For Anarchy is a thing without order; and the Rule of Many is factious, and thus anarchical, and thus disorderly. For both these tend to the same thing, namely disorder; and this to dissolution, for disorder is the first step to dissolution. But Monarchy is that which we hold in honour.” - St Gregory the Theologian

“There is one Lord and Giver of the Law, as it is written: one authority and one Divine principle over all. This single principle is the source of all wisdom, goodness and good order; it extends over every creature that has received its beginning from the goodness of God…, it is given to one man only… to construct rules of life in accordance with the likeness of God. For the divine Moses in his description of the origin of the world that comes from the mouth of God, cites the word: ‘Let us create man in accordance with Our image and likeness’ (Genesis 1.26). Hence the establishment among men of every dominion and every authority, especially in the Churches of God: one patriarch in a patriarchate, one metropolitan in a metropolia, one bishop in a bishopric, one abbot in a monastery, and in secular life, if you want to listen, one king, one regimental commander, one captain on a ship. And if one will did not rule in all this, there would be no law and order in anything, and it would not be for the best, for a multiplicity of wills destroys everything.” - St Theodore the Studite

“The difference between a tyrant and a king is that the tyrant strives in every way to carry out his own will. But the king does good to those whom he rules.” - St Basil the Great