Syncretism Is Rising Again in Rome


The blending of world religions has been high on the Roman Catholic Pope’s agenda for years now, and continues to be:

This year [2016] marks the 30th anniversary of the First World Day of Prayer for Peace that St. John Paul convened back in 1986, an historic event which saw world leaders of different religions come together for the very first time to pray for peace.

The Pope travelled to Assisi by helicopter and after his landing near the  Basilica of St Mary of the Angels where Bishop Domenico Sorrentino of Assisi and the local authorities greeted him, the Pope travelled by car to the Holy Convent of Assisi. Here he was welcomed by Father Mauro Gambetti, Custodian of the Holy Convent, the Ecumenical Patriarch of Constantinople, Bartholomew I, a Muslim reprepresentative, Dr Justin Welby, Archbishop of Canterbury, the Syro-Orthodox Patriarch of Antioch, Efrem II, a Jewish representative and the Supreme Head of Tendai Buddhism (Japan). They then moved to the Cloister of Sixtus IV where the representatives of Christian denominations and World Religions were waiting.

The aforementioned Patriarch Bartholomew seems also to be playing the game of syncretism pretty well.  A recent speech of his focused quite a lot on an abstract, philosophic pan-religion that all world religions, including Orthodoxy, were measured against.  Notice also the focus on man rather than God and on the insistence of a ‘common future/journey’:

On Wednesday, April 26, His All-Holiness Ecumenical Patriarch Bartholomew left Geneva, where he had addressed the World Council of Churches the day before, for Cairo, where he attended and addressed an interreligious conference at Al-Azhar University on Thursday. His address, “Religions and Peace,” focused on the importance of religions and interreligious dialogue in today’s world, and his view of the equally peaceful nature of all religions.

The international peace conference was attended by representatives of the religious, political, and academic spheres from various states, Romfea reports. Conscious of his inter-religious audience, His Holiness speaks throughout of “religion” in general, rather than the particularities of Orthodox Christianity and union with Jesus Christ.

The patriarch opened by noting the increase in terrorist attacks over the past two decades, which have left countless dead and injured, “and which are becoming the greatest threat and source of fear for contemporary societies,” and which are typically blamed on religion. He also highlighted the simultaneous willingness for peace-promoting dialogue among political, religious, and secular leaders.

“How, then,” Patriarch Bartholomew wonders, “after so many conferences, declarations and initiatives for peace, could we witness an increase of violence, instead of noticing a progress in peace making?”

To understand our modern world, he pinpointed four areas in which, not simply Orthodoxy in particular, but religion in general plays a critical role: Religion is connected with the deep concerns of the human being, providing answers to existential questions and opening eternity to man; Religion is related to the identity of peoples and civilizations; Religion has created and preserved man’s greatest cultural achievements, moral values, compassion, and respect for all of creation; and Religion is a vital factor in the peace process.

His All-Holiness did note that religion can cause divisive intolerance and violence, but, speaking of all religions equally, added, “this is rather [religion’s] failure, not its essence, which is the protection of human dignity.”

In his explanation, the extremes of relativism and fundamentalism distort and prevent these essential roles of religion in the modern world, noting that fundamentalism provides skeptics with arguments against faith. Relativism “denies the existence of truth,” while in his presentation, fundamentalism is that which “considers that its own truth is unique, and must therefore be imposed over the others.”

The patriarch recalls the recent terrorist attacks in Paris, Brussels, Istanbul, Saint Petersburg or Stockholm, and the most recent against Coptic churches in Tanta and Alexandria. Of course, all of these attacks were carried out by Muslims and in the name of Islam, although this point does not appear in the patriarch’s speech. Describing all religions as having the same ideals, he states, “The truth is that violence is the negation of the fundamental religious beliefs and doctrine.”

Romfea notes that His All-Holiness received a round of applause from the audience gathered in heavily-Islamic Egypt when he affirmed, “We would like to oppose at least one prejudice: Islam does not equal terrorism, because terrorism is a stranger to any religion.” He also noted that the encyclical of last year’s Cretan Council also emphasizes that fundamentalism does not “belong to the essence of the phenomenon of religion.”

The Constantinopolitan prelate offered the counter-example of the Mediterranean region, which he characterized as a place of peaceful cohabitation of Jews, Christians, and Muslims over the past several centuries, where people of various religions living together find “the most fundamental message for humanity which unites.”

Drawing to a close, he called upon all nations, states, and religions to work together to overcome the violence that we see so often in our world today, as with the various Islamic attacks he had previously referenced. “We need one another; we need common mobilization, common efforts, common goals, common spirit… Our future is common, and the way toward this future is a common journey,” he stated.

In conclusion, the patriarch addressed the inter-religious gathering, with the same words of the Psalmist with which he had opened his presentation to the World Council of Churches: Behold now, what is so good or so pleasant as for brothers to dwell together in unity? (Psalm 133:1).

Then there is Hillary Clinton’s praise of the Patriarch, which has a like theme:

Today, on the 25th anniversary of Ecumenical Patriarch Bartholomew’s election to the head of the Eastern Orthodox Church, Hillary Clinton issued the following statement:

“For the last quarter century, the world has been blessed to have the spiritual leadership of Ecumenical Patriarch Bartholomew, who has taken unprecedented steps to deepen cooperation within the Orthodox sects and to establish inter-religious dialogues with other Christian churches as well as with Muslim and Jewish communities. His All Holiness has worked tirelessly to move the Orthodox Church forward and repair bonds that have frayed over the centuries, including by being the first spiritual head of the Eastern Orthodox Christians to attend a papal inauguration since the Great Schism, and convening the first Great and Holy Council of the Orthodox Christian Church in over 1,200 years. I have had the great honor of seeing Patriarch Bartholomew’s spiritual leadership for myself, and am inspired by his work on human rights, religious tolerance, and environmental protection. I send my best wishes to His All Holiness on this momentous milestone.

With Archbishop Demetrios also being used lately as a stage prop to show the ‘strong bond’ between Greece and the [u.] S., 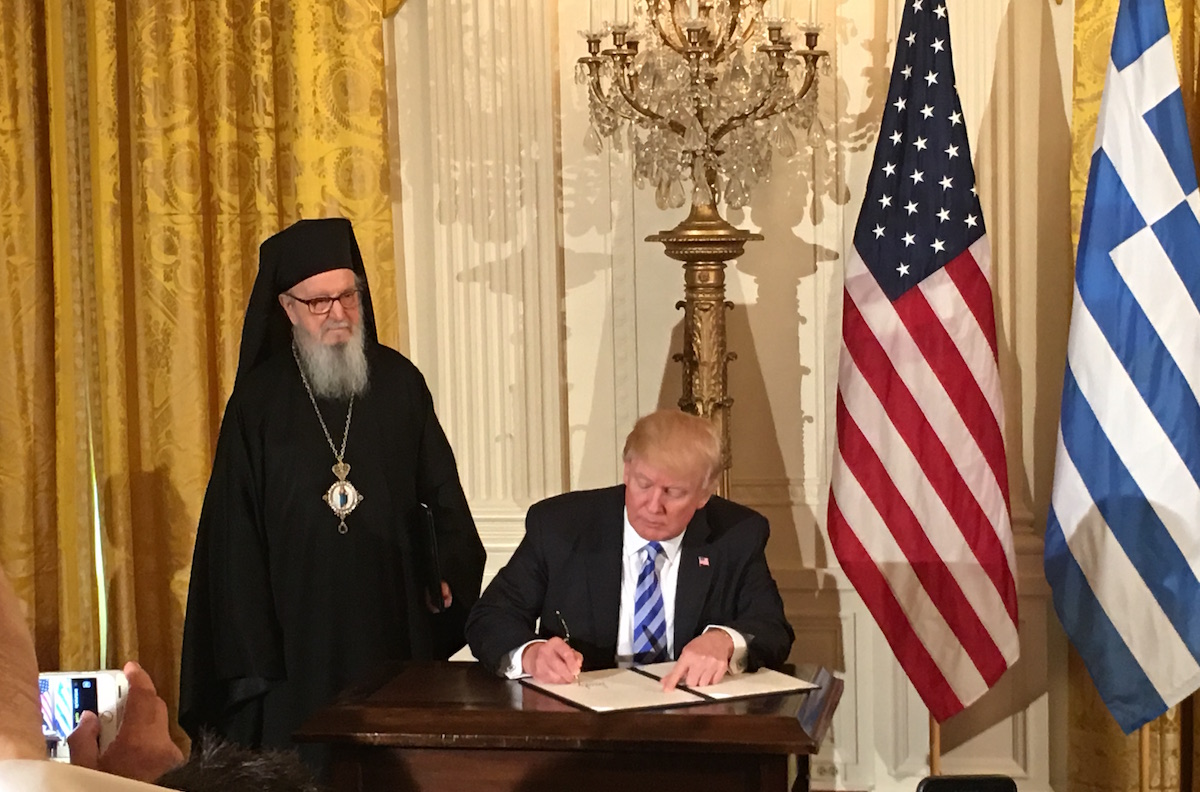 one could at least hope that the Patriarch’s words and actions are simply a bending to pressure and threats applied by the globalists, and not his real beliefs, that he really believes that his See is ‘this martyric Phanar’ (https://www.patriarchate.org/paschal-proclamations/-/asset_publisher/QnqPBbQ42NED/content/patriarchal-encyclical-for-holy-pascha-2017, 2 May 2017), rather than an outpost of the New World Order in Asia Minor, an American vassal state, etc.  One can hope that he is trying to protect his flock as best he can from evil men by playing along, etc., but it seems a stretch.  It is sad to see anyone fall away from the True Faith, especially a bishop.  May God help him.

But we must return where we began, with the Roman Catholic Pope, for with him a deeper danger lies.  Blessed Fr Seraphim Rose said,

In this process of evolution, the “Body of Christ” is being formed in the world. Not the Christ of Orthodoxy, but the “universal” Christ or “Super-Christ,” as he says.

The Super-Christ is defined by Teilhard as the synthesis of Christ and the universe. This “evolving” Christ will bring about the unity of all religions. As he says, quote, “A general convergence of religions upon a universal Christ Who fundamentally satisfies them all: this seems to me the only possible conversion of the world, and the only form in which a religion of the future can be conceived.”cclxv Thus, for Teilhard de Chardin, Christianity is not unique truth, but it is rather, as he says, “an emerging phylum of evolution,”cclxvi subject to change and transformation like everything else in the evolving world.

Even like recent popes, he does not wish to convert the world, but only to offer the papacy as the kind of mystical center of man’s religious quest, a superdenominational Delphic Oracle.

As one of his admirers summarizes his view, “If Christianity...is indeed to be the religion of tomorrow, there is only one way in which it can hope to come up to the measure of today’s great humanitarian trends and assimilate them; and that is through the axis, living and organic, of its Catholicism centered on Rome.”cclxvii

The new syncretism, the religion of Antichrist, is coming, and people like Pope Francis are helping to usher it in.

Anathema to the Union!
Posted by Walt Garlington at 6:45 PM