Mankind is being split in twain.  Some are embracing again the old traditions as much as they can; others are rejecting whatever is left of them.

. . . I think that what [Hank] Hangegraaff is doing is actually very predictable. He of course has his own personal reasons for making the change from the Protestant church to the Orthodox Church, but his conversion is actually part of a trend that is going on worldwide; and this trend involves nothing less than a return to traditional ways of life and belief, what scholars call retraditionalization.

What we have to understand is that decades of secular globalization have actually detraditionalized cultures and societies, replacing traditional ways of life with more globalistic and consumer based lifestyles. So while traditional societies believe that every person born into the world is born into a moral obligation to conform their lives into a harmonious relationship with the divine meaning and purpose inherent in the world around us, globalistic secular societies reduce the human person to a sovereign individual who has no moral obligations apart from that which one chooses for oneself. And so globalistic secular societies tend to be very hostile towards traditions, since traditional conceptions of say religion, gender, and sexuality are now considered unduly oppressive, intolerant, and unjust.

Now the fact is that decades of this secular globalization has
reignited and reawakened a hunger and a longing for traditional ways of life and society. It’s not just a matter of Farmers Markets being set up to counter the anti-communal effects of the local mall; globalization provokes similar sentiments that create a groundswell of support for a return to far more traditional and religious ways of life.

For example, we’re seeing nothing less than the re-awakening of Byzantine-inspired Christian civilization in Eastern Europe. Not only has Russia rebuilt over 15,000 churches since the end of communism, but a recent survey found that 30 percent of Russians would like to see a return to some kind of monarchical rule comparable to the Tsars. Just a few months back, the Catholic Bishops of Poland, in the presence of President Andreiz Duda and many Catholic pilgrims, officially recognized as the King of Poland and called upon Him to rule over their nation, its people and their political leaders. You have Hungary reincorporating Christianity into their constitution. You have the president of Moldova saying that his country has no future without Christianity. You have polls that indicate that the Orthodox Church is the single most trusted institution in nations such as Georgia and Bulgaria.

And we’re finding that this retraditionalization is particularly evident among young people. When Pope Benedict brought back the Latin Mass, also known as the Tridentine Mass, it was expected that the congregants showing up for its revitalization would be people over 60, who are old enough to remember their Latin from before the Second Vatican Council in the 1960s that replaced the Latin Mass with vernacular worship. Instead, to everyone’s amazement, the majority of congregants showing up were Catholics in their late-teens and early twenties.

And when asked about this, priests such as the Rev. Christopher Smith in South Carolina, who conducts a Latin Mass, note that young people see a great sense of beauty and reverence and devotion, and also a sense of historical continuity. They’re enamored with praying the same prayers that saints from 1,500 years ago were praying when they went to Mass, in the same language. And Fr. Smith has further noted that attendance at his parish’s Latin Mass has grown from about 60 to more than 300 worshipers.

Moreover, you have the renaissance of classical Christian education throughout the nation, which of course involves the revitalization of Latin and Greek as well as theology as the queen of the sciences and the reading of the literary classics. You have a mass boom in homeschooling both here in the States and in Russia. You have a return to big families, where it’s no longer an anomaly among conservative Christians to have 6, 7, or 8 children. In fact, the Amish are doubling in population every 20 years. You have the advent of Prayer Book Presbyterians and churches rediscovering the liturgical calendar and practicing things like Ash Wednesday. And the hottest thing in Christian circles right now is what’s called ‘The Benedict Option,’ a communal lifeworld modeled after the tradition of St. Benedict.

Now this retraditionalization is not only going on in formerly Christian civilizations; we’re seeing the advent of Sharia councils in the U.K. that arbitrate between conflicts among Muslims, the revival of imperial Shintoism at the highest levels of the Japanese government, a revitalization of Confucian philosophy among Chinese officials, Hindu nationalism in India, Islam in Turkey, and on and on and on.

And of course, we have a tsunami of nationalist populism sweeping throughout Europe and the U.S., all of which involve some form of reawakening localized traditions, customs, languages, ethnicities, and religions as mechanisms of resistance against secularizing globalist tendencies.

Last year Harari argued that the world will experience a radical shift in the next 200 years.

Using biotechnology and genetic engineering, Professor Harari claimed the wealthy will transform into a new type of divine, immortal human with complete power over life and death.

He argued that the rich are set to become God-like cyborgs in what could be the ‘biggest evolution in biology’ since life emerged.

During a recent speech at the Hay Literary Festival in Wales, Professor Harari said, ‘We are programmed to be dissatisfied,’ The Telegraph reported.

‘Even when humans gain pleasure and achievements it is not enough. They want more and more.

‘I think it is likely in the next 200 years or so homo sapiens will upgrade themselves into some idea of a divine being, either through biological manipulation or genetic engineering of by the creation of cyborgs, part organic part non-organic.

The technology to do this, however, will be restricted to the very wealthy, claims Professor Harari.

Up until now, he says society has been held together by inventing ‘fictions’, such as religion, money and the idea of fundamental human rights.

As long as humans believed they relied more and more on these gods they were controllable, he said

‘But what we see in the last few centuries is humans becoming more powerful and they no longer need the crutches of the Gods.’

Artificial intelligence and machine learning will create computers so sophisticated and godlike that humans will need to implant "neural laces" in their brains to keep up, Musk said in a tech conference last year.

"There are a bunch of concepts in your head that then your brain has to try to compress into this incredibly low data rate called speech or typing," Musk said in the latest interview.

The temptation of man to turn himself into a god, into a superman, without God is stronger than ever.  However, this has already been achieved by the saints:  they who raise the dead, heal sicknesses, are unharmed by heat, cold, etc., control the weather, stop the sun in its path, tame wild beasts, know the thoughts of the others, see things yet to come, see events happening in places afar off, appear to people likewise far away, multiply food, and so on.

It is not necessary for men and women to satanically mutilate themselves in order to attain Godlikeness. 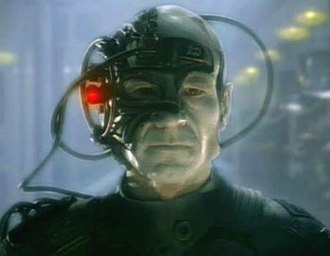 Resistance to completely utilitarian, mechanical efficiency is futile.  (Image from https://en.wikipedia.org/wiki/Borg_(Star_Trek), opened 9 May 2017)

When we unite ourselves to God by the ways He has taught us through the Holy Scriptures, the Holy Fathers, etc., all things are possible:

. . . God is united to humanity in the womb of the Virgin – Adam’s human nature is made divine in the union with God. Eve was tricked by the Serpent into thinking she could become like God by disobeying God. In Christ the hope of our being god-like becomes a reality for in Christ God submits Himself to taking on human nature. Christ, the incarnate God, conforms humanity to God’s will that we would become divine.

A pain causing lesson: we don’t become divine by asserting our will against God but only by submitting our will to God’s will.

Kevin: What is the ultimate goal of the acquisition of divine grace for the Christian?

Fr. Michael: Simply put, it is to become like God; to be saturated with the uncreated grace of God in a permanent and abiding way so that “It is no longer I who live, but Christ who lives in me” (Gal. 2:20). This is the condition of the Saints, theosis or deification.

The Fathers use the analogy of iron and fire.  When a rod of iron is placed in fire for a time, it takes on the properties of the fire, i.e. it becomes red hot.  It doesn’t become fire itself, nor does it cease to be iron; rather, the iron participates in the properties of fire.  In a similar way, our humanity can participate in God’s grace (not His essence) because of Christ’s incarnation, death, and resurrection.  This is the ultimate “good news” of the Gospel and the goal of Orthodox Christianity.  This is the purpose for which we were created.

Anathema to the Union!
Posted by Walt Garlington at 6:28 PM