The Legend of Zelda: Link’s Awakening

Jay Dyer has said on a number of occasions that Hollywood/the entertainment industry is giving modern man a new mythology to believe, or rather giving him back his pre-Christian heathen beliefs.  The Legend of Zelda: Link’s Awakening is a very good illustration of this.  Its central theme is Link’s quest to awaken the Wind Fish, which lives in a giant egg atop a mountain, so that he can escape the island.

The island world of Koholint in which all the action takes place is said to be a dream of the sleeping Wind Fish, its unconscious creation.  All this has much in common with the creation myth involving the serpent and the egg. 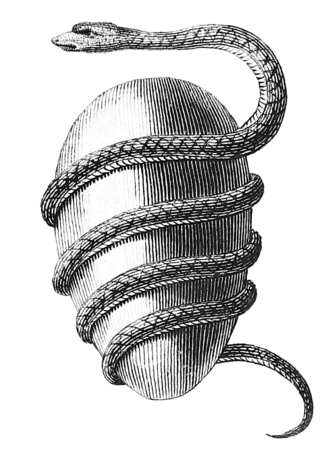 The Orphic egg is usually represented as an egg surrounded by a coiled serpent. The egg symbolizes the belief in the Greek Orphic religion that the universe originated from within a silver egg. The first emanation from this egg, described in an ancient hymn, was Phanes-dionysus, the personification of light:

“ineffable, hidden, brilliant scion, whose motion is whirring, you scattered the dark mist that lay before your eyes and, flapping your wings, you whirled about, and through this world you brought pure light.”

The serpent represents the male principle and the egg the female.

The Dyad is the number Two, but the Female Principle is a transcendent form of Two called the Indefinite Dyad, where "Indefinite" must be understood to mean indeterminate, unlimited, boundless, and infinite, all of which are relevant to the Indefinite Dyad. First I will focus on Her property of being Unlimited or Indeterminate, which makes Her the opposite of the Monad, who is the principle of Limit, Determination, and Definition. Thus the Monad and Indefinite Dyad are the Principles of Limit (Peras) and the Unlimited (Apeiria), who operate at all levels of Being, but in a different way at each level.

At the most fundamental level, the Monad is the Primordial One and the Indefinite Dyad is Primordial Matter, because Prima Materia is the indeterminate, formless, quality-less foundation of all being; She is Sub-stance -- She who stands underneath.

The sleeping egg in Link’s Awakening functions similarly to the female dyad, being the source of being for all that exists on Koholint.  Link is the male monad, the lone adventurer, who imparts limits/wakening to the Wind Fish/dyad.

On one level, the wakened Wind Fish freed from the egg is Phanes, mentioned briefly a little earlier:

The first emanation from this egg, described in an ancient hymn, was Phanes-Dionysus, the personification of light. In Greek myth, particularly Orphic thought, Phanes is the golden-winged hermaphroditic primordial being who was hatched from the silver shining cosmic Orphic Egg. Called Protogonos (First-Born) and Eros (Love) — being the seed of gods and men — Phanes means manifestor or revealer, and is related to the Greek words “light” and “to shine forth.”

Malela and Cedrenus, in the passage referred to under 'Night', add that Orpheus tells us that: 'Light [Phanes, "Bright Space Son of Dark Space"] having burst through the Æther [the Âkâshic Eggl illuminated the Earth [the First Earth--or Cosmos]; meaning that this Light was the Light which burst through the highest Æther of all--[and not the sensible light that we see]. And the names of it Orpheus heard in prophetic vision, and declares them to be Metis, Phanes and Ericapæus, which by interpretation are Will, Light and Light-giver [or Consciousness, Light, and Life]; adding that these three divine powers of names are the one power and one might of the One God, whom no man sees--and from his power all things are created, both incorporeal principles, and the sun and moon and all the stars.'

On another level, Phanes is Link (and through Link the game’s player), the one who has completed the initiatic quest and has been transformed by it.  Shadows, illusions, and dreams are dispelled; light and liberation are attained:

Early on, Link encounters the Wind Fish's Egg sitting on top of Mount Tamaranch in the Tal Tal Heights region on the northern section of the island. Link is to gather eight instruments found in each of the dungeons and play the "Ballad of the Wind Fish" in front of the egg. This egg also serves as the final dungeon, with the Shadow Nightmares featured as the entity keeping the Wind Fish in its eternal slumber.[16]

Upon completing the game, Link is sent upward into the heavens via a staircase created by the Wind Fish. The Dreamer, who has now awakened, reveals himself to be a giant whale lavishly endorned with cloth, metals, and precious stones. He explains the peril of the island, but ultimately tells Link that all dreams must end.[5] With this statement, the island begins to disappear and Link is seen floating on a piece of his wrecked ship. While contemplating if it was only a dream, he looks up to see the Wind Fish flying off into the distance with a flock of seagulls.

Manly P. Hall had said about the serpent and egg, “The ancient symbol of the Orphic Mysteries was the serpent-entwined egg, which signified Cosmos as encircled by the fiery Creative Spirit. The egg also represents the soul of the philosopher; the serpent, the Mysteries. At the time of initiation, the shell is broke and man emerges from the embryonic state of physical existence wherein he had remained through the fetal period of philosophic regeneration.”

Jung explains that the serpent and spiral are symbols of psychological growth, the unconscious mind circling and drawn ever closer to the integrated Self, which is the monad at the center of the quaternity. The serpent circles the egg, because the center will become the seed of rebirth. As Jung says, ``Out of the egg -- symbolized by the round cooking-vessel -- will rise the eagle or phoenix, the liberated soul.'' The liberated Self is often symbolized by an hermaphroditic amalgam of the Sun and Moon, that is, a synthesis of the most exalted states of Fire and Water. In some Orphic myths the cosmic egg produces Phanes, who is winged, bisexual and self-fertilizing, a symbol of the liberated, balanced, self-regenerating psyche.

Such are some of the main symbols in this game, and such are the ideas to which they connect the players.  With a re-make for the Nintendo Switch on the horizon, one ought not to let his guard down too much if he wishes to walk through it.  Screen viewing is well-known to make one susceptible to suggestion:

In an experiment in 1969, Herbert Krugman monitored a person through many trials and found that in less than one minute of television viewing, the person’s brainwaves switched from Beta waves – brain waves associated with active, logical thought – to primarily Alpha waves. When the subject stopped watching television and began reading a magazine, the brainwaves reverted to Beta waves.

One thing this indicates is that most parts of the brain, parts responsible for logical thought, tune out during television viewing. The impact of television viewing on one person’s brain state is obviously not enough to conclude that the same consequences apply to everyone; however, research involving many others, completed in the years following Krugman’s experiment, has repeatedly shown that watching television produces brainwaves in the low Alpha range.

Advertisers have known about this for a long time and they know how to take advantage of this passive, suggestible, brain state of the TV viewer. There is no need for an advertiser to use subliminal messages. The brain is already in a receptive state, ready to absorb suggestions, within just a few seconds of the television being turned on. All advertisers have to do is flash a brand across the screen, and then attempt to make the viewer associate the product with something positive.

Anathema to the Union!


Posted by Walt Garlington at 6:44 PM