Help for the Opioid Crisis

Drug addiction continues to rage in the States:

But God in His kindness has given us a great helper to overcome this scourge:  St Ephraim of Nea Makri (+1426). 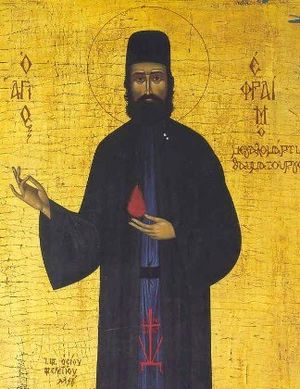 He was cruelly martyred by the Turks in the 15th hundredyear but has been miraculously revealed to us in these latter times to help us save our souls and bodies.  Here is a short account of his life and martyrdom:

"ST. EPHRAIM THE GREAT MARTYR AND WONDERWORKER - May 5th
The holy New Martyr and wonderworker Ephraim was born in Greece on September 14, 1384. His father died when the saint was young, and his pious mother was left to care for seven children by herself.

When Ephraim reached the age of fourteen, the all-good God directed his steps to a monastery on the mountain of Amoman near Nea Makri in Attica. The monastery was dedicated to the Annunciation and also to St Paraskeva. Here he took on his shoulders the Cross of Christ, which all His followers must bear (Matt. 16:24). Being enflamed with love for God, St Ephraim eagerly placed himself under the monastic discipline. For nearly twenty-seven years he imitated the life of the great Fathers and ascetics of the desert. With divine zeal, he followed Christ and turned away from the attractions of this world. By the grace of God, he purified himself from soul-destroying passions and became an abode of the All-Holy Spirit. He was also found worthy to receive the grace of the priesthood, and served at the altar with great reverence and compunction.

On September 14, 1425, the barbarous Turks launched an invasion by sea, destroying the monastery and and looting the surrounding area. St Ephraim was one of the victims of their frenzied hatred. Many of the monks had been tortured and beheaded, but St Ephraim remained calm. This infuriated the Turks, so they imprisoned him in order to torture him and force him to deny Christ.

They locked him in a small cell without food or water, and they beat him every day, hoping to convince him to become a Moslem. For several months, he endured horrible torments. When the Turks realized that the saint remained faithful to Christ, they decided to put him to death. On Tuesday May 5, 1426, they led him from his cell. They turned him upside down and tied him to a mulberry tree, then they beat him and mocked him. "Where is your God," they asked, "and why doesn't he help you?" The saint did not lose courage, but prayed, "O God, do not listen to the words of these men, but may Thy will be done as Thou hast ordained."

The barbarians pulled the saint's beard and tortured him until his strength ebbed. His blood flowed, and his clothes were in tatters. His body was almost naked and covered with many wounds. Still the Hagarenes were not satisfied, but wished to torture him even more. One of them took a flaming stick and plunged it violently into the saint's navel.

His screams were heart-rending, so great was his pain. The blood flowed from his stomach, but the Turks did not stop. They repeated the same painful torments many times. His body writhed, and all his limbs were convulsed. Soon, the saint grew too weak to speak, so he prayed silently asking God to forgive his sins. Blood and saliva ran from his mouth, and the ground was soaked with his blood. Then he lapsed into unconsciousness.

Thinking that he had died, the Turks cut the ropes which bound him to the tree, and the saint's body fell to the ground. Their rage was still not diminished, so they continued to kick and beat him. After a while, the saint opened his eyes and prayed, "Lord, I give up my spirit to Thee." About nine o'clock in the morning, the martyr's soul was separated from his body. These things remained forgotten for nearly 500 years, hidden in the depths of silence and oblivion until January 3, 1950."

For an account of the miraculous finding of St Ephraim’s holy relics by Mother Makaria, please go to this page:

But as we said earlier, St Ephraim has been given to us by God to help us overcome the maladies peculiar to this age, like despair and drug addiction.  Here is how he is described at one site:

The following is one ensample of the Saint’s love for struggling mankind:

To begin with, it has been two months since I’ve stopped taking the poison, and now I feel like any other normal healthy person. I have no desire whatsoever to put it into my bloodstream again, and I owe this not to any effort of my own, but entirely to the miraculous power of God and His Saint.

I was born and raised in Athens, in Koukaki, until the age of eight. I am an only child and my parents love me passionately and never denied me anything I wanted. When I was eight years old my parents and I left for America for a better life. With the help of relatives there they found jobs and I attended school.

As I grew up, however, there also grew within me many absurd desires and vices. Due to my character I was easily caught up in bad company and soon tried marijuana and hashish. As the years went by the light drugs didn’t satisfy me or my companions. So, we got into the heavy drugs we found in the same surroundings. We had access to them as easily as the light drugs. These, however, were more expensive, and I didn’t have a job. In the beginning I stole from the wallets and pockets of my parents. However, when with time I had need of greater doses, and after I had been caught by my parents, I even began beating them to get the money. My condition was critical; I understood that, but I couldn’t turn back. My parents rushed me to doctors and psychologists, hoping they could do something, but there was nothing, no light from anywhere. The doctors told them that if I didn’t get out of that environment, my life would be very short.

Once, during that time, as I sat at home alone in a state of despair, a strange visitor whom I had never seen before appeared in front of me. He was of medium height, and had very large round eyes that kept rolling about. He had long black bushy hair on his body. Also he had horns and a tail. He had a very loud, strong voice and a frightening persuasiveness that didn’t leave room for disagreement.

He began to give a detailed account of my life from the time I was born until that moment, and I could only agree. “You’ve enjoyed everything,” he told me at the end, “there’s nothing left for you at all, only that you come with me...” I asked him, “How?”

“You will take the car,” he said, “and you will follow such-and-such a road. You will drive along it for so many miles (I don’t remember the number) and there I will be waiting for you...” This road was straight for many miles, and at a certain point had a slight bend, where many drivers going too fast had skidded off the road, crashed into a wall and died. I had already heard of many such unfortunate accidents that had occurred at that same place. I did exactly as he told me, and I too crashed into the wall. The car ended up almost unrecognizable, but they took me out with only minor injuries. After they gave me first aid, I went home.

About ten days after my accident, the same unusual visitor reappeared, this time in the kitchen. He had a frown of anger on his wild, imposing face, and with a nod of the head backwards,2 said in the same peculiar voice, “You didn’t do anything.” I sat looking at him petrified, and just managed to ask, “What should I do?”

“Right now—take a triple dose of what you usually take and you’ll come with me for sure.” He vanished and I didn’t even bother to ask myself how he got into my house, or who he was—I just put the plan into action.

I got the drug ready in the syringe and I searched to find a place on my much-pierced body. The dose was large and I immediately fell unconscious. When I was still unconscious I saw a tall man with a cassock and a black cap, who had a cross engraved on his forehead. “Don’t be afraid,” he said, “you will get well, and when you return to Greece, come to my home. I am Ephraim.”

I got up as though I hadn’t even taken any of that accursed poison. I felt a strong desire to leave for Greece, and, as soon as I told my mother, she was amazed and thought it a miracle because they had tried to send me away from that environment many times before without success. I told my mother everything that had happened to me, and she decided to accompany me on my trip. When we came to my old neighborhood [in Athens], we went to the priest of the parish there, and from him I learned who the strange visitor was, and what he wanted from me. It was the devil and he wanted my immortal soul. I thanked God from the depths of my soul. I confessed and fasted, and after fifteen days the priest gave me Holy Communion. When I saw the icon of St. Ephraim, I knew that it was he who had saved me from that terrible poison.

I went to Nea Makri and had a liturgy served to thank the Saint. Now I come to the monastery sometimes to get away from the world a little, and to be reassured that I don’t need the drugs anymore.

This is how good the Lord is to us sinners, giving us such a great intercessor and deliverer in St Ephraim just as the devil is assailing mankind with opioids, marijuana, and all kinds of other drugs as never before.  May God deliver us from all this evil by St Ephraim’s holy prayers.

Anathema to the Union!
Posted by Walt Garlington at 6:49 PM