Illusion of Gaia: Evolution Will Be Our Savior

There is a recurring theme in entertainment media these days:  Contact with outer space leads to an advancement in human evolution.  A few ensamples:

Chrono Cross:  Contact with a piece of an off-world entity called Lavos caused humanity to leap ahead of the Reptites in their development.

One of the sources most openly proclaiming this idea is the role-playing game Illusion of Gaia for the Super Nintendo (1993-4).  A comet hurtling toward the in-game world greatly speeds the evolution of anything that stands in its light.  The following is a little of the dialogue from the game:

SPIRIT: The light released from the comet has a profound effect on the growth of living things. When the star nears Earth's orbit, all living things experience a dramatic evolution...

SPIRIT: The evolution of living things took a long time. From insects to fish, from reptiles to mammals, then humans were born. And so human beings have evolved.

SPIRIT: From ancient times comets have been called the spirits of stars, but also the demon of stars. The one now nearing the Earth is a demon of stars... The comet is the highest form of consciousness. The Earth will evolve beyond imagination...

This is very much in line with occult teaching.  Theosophy in particular teaches,

Modern science explains the emergence of humankind as a result of chance chemical events and random mutations. The odds of this occurrence are so slim that scientists regard the evolution of humanity as nothing short of a miracle. Theosophical teachings, by contrast, say that this “miracle” is really the orderly work of natural forces with the assistance of intelligent beings. These intelligences guiding the process of evolution have been recognized in all religious traditions of the past. They were conceived of as gods, angels, devas, and so forth.

According to The Secret Doctrine, once the earth was ready to hold human life, two groups of celestial beings were called upon to assist in the “creation” of man—the Lords of the Moon and the Lords of the Flame: “Bring forth men of your nature. Give their spirits a subtle form. Mother Earth will build a material covering” (Secret Doctrine, 2.75).

The devil worshipper Manly Hall writes about evolution in a similar way:

It is crucially important that Christians not compromise the teaching that the cosmos and man were created ex nihilo by a special act of God:

This is all more important as we witness the ongoing rise of the UFO/ET cult:

. . . The implications of the UFO/Extraterrestrial phenomenon are huge. It represents a major paradigm shift, possibly the biggest in human history. It leaves no aspect of humanity untouched and forces us to ask deeper questions about ourselves and our understanding about the true nature of reality.

History, science, technology, education, medicine, economics, a proper acknowledgement and study of metaphysics, non material science and human consciousness will change forever. The biggest thing is to look at the way we live here on Earth, and ask ourselves why we live the way we do when it doesn’t have to be this way. . . .

Perhaps Chris Carter through Dana Scully spelled it out the best in The X-Files episode ‘The Sixth Extinction’:

SCULLY: (voiceover) The work here is painstaking-- a slow and tedious piecing together. It appears to be a craft, its skin covered in the intricate symbols you and I both saw but which I now understand are part of a complex communication. Dr. Barnes has broken some of the symbols into letters using an ancient Navajo alphabet and, though it has helped to uncover some of what's here it has also made for greater confusion. On the top surface of the craft I'm finding words describing human genetics. (On graph paper she translates the names of the four basic nucleotides - CYTOSINE, GUANINE, ADEMINE, THYMINE. Efforts to read the bottom of the craft have been harder. Our workers were scared away by phenomena I admit I can't explain-- a sea of blood, a swarm of insects. But what little we have found has been staggering-- passages from the Christian Bible, from pagan religions, from Ancient Sumeria... science and mysticism conjoined. But more than words, they are somehow imbued with power. I've ignored warnings to quit this work, remaining committed to finding answers, afraid only that our secret here won't last and that I might be too late.

‘Science and mysticism conjoined’:  That seems to be the direction we’re going, doesn’t it (especially now in the Age of COVID, when everyone is eager to ‘follow the science’)?  St Seraphim Rose warned about this in his critique of men like Teilhard de Chardin:

In one sense, the imitator of Christ will appear as a kind of saviour, solving man’s economic and political problems and offering to satisfy his spiritual aspirations through what Fr. Seraphim called a “melting pot” of science and world religions. According to the worldview of the “new religious consciousness,” however, the ultimate saviour will be evolution itself, moving forward in a natural development of this world into supposedly the Kingdom of God. The last great deceiver, who in the end will pretend to be Christ, will be seen as but another magnificent product of evolution.

Before we wrap up, there are some other noteworthy esoteric elements in this game that we’d like to mention.

**First is what happens in the Egyptian pyramid level.  The player must transform his body into energy in order to enter it.  This is very near the occult teaching about what supposedly occurred within the pyramids of Egypt:  That the soul of the initiate into the demonic Mysteries would be separated from his body during those initiation ceremonies and enter into the ‘celestial realms’ (Hall, Secret Teaching, p. 119).  Hence, the player is himself unknowingly being welcomed into the world of the Egyptian Mystery cult. 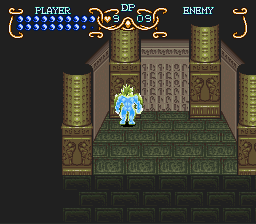 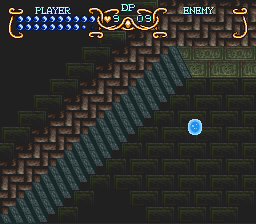 --Will after transforming into Shadow (his energy-only form) to pass through the floors of the Pyramid, http://classicgamesparadise.com/super%20nes/Illusion%20of%20Gaia%20Guide%204.html

**Second is the union of Will and Kara that creates the Firebird at the final battle with Dark Gaia.  The attainment of androgynous being (the union of male and female in a single person) is a preoccupation with the occultists, believing it imparts greater powers to the one who attains that state (Hall, p. 116; see also de Hart and Farrell, Transhumanism; and  https://confiterijournal.blogspot.com/2019/12/crimea-wwiii-and-rise-of-antichrist.html).

The Firebird in mythology also contains both male and female characteristics:

**It should also be noted that the final battle takes place in the Tower of Babel, the great symbol of human pride and rebellion against God.  However, in the game Will and Kara are only allowed to enter the Tower unharmed because they are ‘evolved humans’.  Thus, the message is that association with the Tower of Babel is not an evil thing for mankind but rather that it signifies the improvement of the species, that it is a refuge for the best of the men and women of the world.  Do not abhor it, then, but adore it.  Such is the un-Christian messaging being put forward here.

**The constellation in which the comet is located is Cygnus, which is often associated with the swan:

The swan, in turn, is a symbol of transformation, which as we have seen is a major theme in this game:

**A short snippet of text also reveals the monism/pantheism underlying the game:

WILL: Of course. There's no difference between humans and animals...

This belongs to the religious teaching rising in popularity in the world, which imparts a divine status to the creation and thus a moral equality amongst all its parts (man=cat=tree=fly, and so forth, since all creatures are emanations from the same life force):

Beliefs such as this are giving rise to new legal doctrines that seek to grant rights formerly reserved to human beings to the creation as a whole.  From Ecuador to California to Florida to Mexico, efforts are underway to ‘transform the law to recognize, honor and protect Nature’s inherent rights to exist, thrive and evolve’ (there’s that word again--W.G.).

Despite all of this, in an attempt to end on a more positive note, there is some good in Illusion of Gaia.  Some of the music is quite memorable.  Here are a few of the better songs, with which we close this review:

Anathema to the Union!

Posted by Walt Garlington at 6:06 PM