A Saint Worthy of Notice by the South: St Myron the Wonderworker

A farmer who became a saint:

Saint Myron, Bishop of Crete, a wonderworker, in his youth was a family man, and worked as a farmer. He was known for his goodness, and he assisted everyone who turned to him for help. Once, thieves burst in upon his threshing floor, and St Myron himself helped them lift a sack of grain upon their shoulders. By his generosity the saint so shamed the thieves, that in future they began to lead honorable lives.

Out of profound respect for the saint, the Cretan people urged him to accept ordination to the priesthood in his native city of Raucia, and afterwards they chose him Bishop of Crete.

Wisely ruling his flock, St Myron received from the Lord the gift of wonderworking. At the time of a flood on the River Triton, the saint stopped its flow and went upon it as upon dry land, and then he sent a man back to the river with his staff to command the river to resume its course. St Myron fell asleep in the Lord at the age of 100, around the year 350.

Farmers and gardeners, here is a good patron for you all! 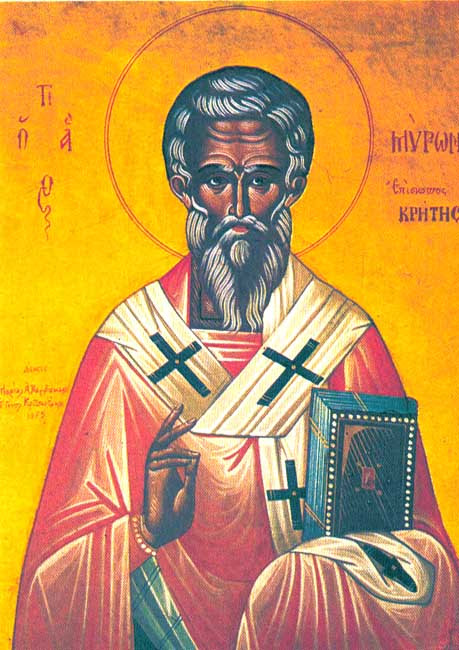 Posted by Walt Garlington at 5:06 PM