St Valentine’s Day in the after-Schism, after-Reformation West has met the same fate as other holy days on the Orthodox Church’s calendar:  It has been emptied of anything truly holy (prayers, Church services, processions, icons, etc.) and turned into an excuse for debauchery by the masses and for money-making by the merchants.

But it needn’t be this way.  We can begin to repent, and part of that work is remembering the Saints who bear the name Valentine on 14 February and on other days of the year, praising them, and asking them to pray for us, the unworthy sinners:

Valentine Jan 7
+ c 470. An abbot who became a bishop in Rhaetia. He reposed in Mais in the Tyrol in Austria. Some years later his relics were translated to Trent and then to Passau.

Valentine Feb 14
+ 269. A priest and doctor in Rome martyred probably under Claudius the Goth and buried on the Flaminian Way. In 350 a church was built over his tomb.

Valentine Feb 14
+ c 269. A Bishop of Terni in Italy martyred under Claudius the Goth.

Valentine and Hilary Nov 3
+ c 304. A priest and his deacon, beheaded at Viterbo near Rome under Diocletian.

Valentinian Nov 3
+ c 500. Bishop of Salerno in the south of Italy.

To the dismay of some,

. . . the Encyclopedia Britannica says: "St Valentine's day as a lovers' festival... has no relation to the saint or to any incident in his life. These customs seem rather to be connected either with the pagan Roman festival of the Lupercalia which took place in the middle of February, or with the spring season in general."

But for those seeking a patroness of courtship, marriage, and so forth, such a one does exist: St Dwynwen of Wales.

One of the most celebrated female saints of Wales is Venerable Dwynwen (also Donwenna: + c. 460; according to another version: fifth-sixth centuries). The name “Dwynwen” means “she who leads a blessed life”. She hailed from Wales and was famous for her ascetic life.  . . . pious people in Wales and Cornwall greatly venerated and loved this saint throughout the centuries.

. . . this saint led an ascetic life in Llanddwyn for many years and became the patron of love and marriage afterwards for very many centuries. Thousands of pilgrims from Wales and even beyond flocked to her chapel, the shrine with her relics and the holy wells associated with her at Llanddwyn every year, in spite of the extreme remoteness of that site, and asked for her protection – and numerous miracles were recorded. The shrine of St. Dwynwen was so famous that it rivalled St. David’s Cathedral with the shrine of St. David and the holy well of St. Winifred at Holywell in popularity in Wales.

Especially young men and girls from Wales and other parts of Britain used to come to St. Dwynwen at Llanddwyn, fervently pray, asking for her protection and granting a blessed and successful marriage through her intercessions – and many received that what they asked for. In the Middle Ages the chapel (and later church) in Llanddwyn was enlarged and many times received generous donations as an expression of believers’ gratitude for its patron-saint’s prayers. The medieval church must have been very splendid, and it certainly had a golden statue of its patroness. Wax candles were permanently lit around the saint’s shrine and the local parish gradually became one of the richest ones in North Wales. The prominent Welsh poets Dafydd ap Gwilym (mid-fourteenth century) and Dafydd Trefor (in c. 1500) both visited Llanddwyn and praised its beauty and spirituality, along with the virtues of St. Dwynwen, in verses of their poems. A number of very touching songs were dedicated to the saint over the centuries.

The petitions of many pilgrims who were in love or asked for a lifelong husband or a wife were fulfilled after their prayers near St. Dwynwen’s relics as well as by her holy well.  . . . Despite the great distance, proximity to the forest and prohibition of the veneration of saints after the Reformation, the influx of pilgrims continued even for some time after Henry VIII.

St. Dwynwen, however, helped not only lovers, but also the sick and even animals. Many farmers of Wales considered her their and their animals’ heavenly patron. Countless cases of healing from various ailments near her relics and holy wells were recorded (cures from different aches, pleurisy, warts); miracles continue to occur even nowadays.  . . .

The revival of the veneration of St. Dwynwen began in the nineteenth century, when a fourteen-foot-tall cross was erected in her memory close to the church’s ruins (the supposed site of her hermitage), and in 1903 a Celtic-style St. Dwynwen’s cross was installed nearby.  . . .

. . . There is also a revival of Dwynwen’s veneration as a protectress of farm animals.

We hope and pray that the veneration of this ancient Orthodox saint, patroness of love and marriage, will increase among Orthodox Christians as well.

Holy Mother Dwynwen of Llandwyn Island, pray to God for us! 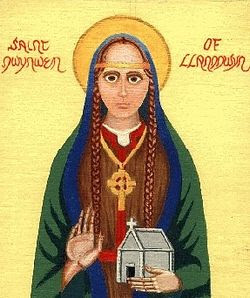 May the South also join in that renewed veneration!

Anathema to the Union!
Posted by Walt Garlington at 6:19 PM