Despite living in the age of techno-wizardry wonders that promise to make our lives less stressful, more people than ever say they feel more rushed, not less, in their day-to-day lives.

That time pressure is a common experience is evidenced by the fact that an increasing proportion of the population report feeling short of time. Since 1965, the US time–use researcher John Robinson has been asking adults, “Would you say you always feel rushed, even to do things you have to do, only sometimes feel rushed, or almost never feel rushed?” The proportion of Americans reporting that they always feel rushed rose from 25 percent in 1965 to 35 percent forty years later. Almost half now also say that they almost never have time on their hands. According to most evidence, people perceive leisure time as scarcer and more hectic. And this is also true cross–nationally, where there has been consistent historical growth of busy feelings through the last part of the twentieth century.

Perhaps it is time to think again about the level of progress/development/industrialism that we need, about returning to a slower, more agrarian lifestyle.  Some words from the Japanese agrarian Masanobu Fukuoka are worth considering.  We do not agree with all of his religious views, but overall he is very close to the truth.

Since Fukuoka-san’s words strongly echo the life lived at typical Orthodox monasteries, we have included a couple of pictures from one, the Holy Dormition Dalmatovo Monastery in Western Siberia, http://www.pravoslavie.ru/foto/set1624.htm, opened 28 Feb. 2017: 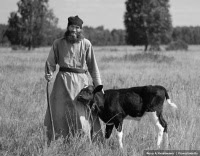 Anathema to the Union!
Posted by Walt Garlington at 5:13 PM