It is said that Ninja Gaiden for the Nintendo Entertainment System was the first video game to include cinematic scenes.  For a series of games so absurdly difficult, it is good that some reward was offered by the game creators.  But the movie-style scenes are far more important for another reason:  They offer a slew of insights into the plans of the demonic bankster/corporate Elite for the world, as well as attempting to inculcate the expected anti-Christian worldview.

The latter first.  Dualism or Manicheanism forms the Godlorish (theological) backdrop of the series.  Two statues (Light and Dark), two swords (Dragon and Chaos), and two Ryus (Ryu Hayabusa is the hero of the series) are what the three games respectively revolve around.

Good and evil are depicted as something like co-eternal powers.  A Demon can be revived every 700 years to destroy the world, and Jaquio himself is ‘reborn’ in Part II: 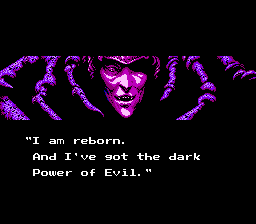 The way out of this unending cycle (time is shown to be cyclical here, as Ryu is something of a reincarnation of the Dragon Ninja hero of the past who must battle the revived Demon to save the world) is shown to be technology, which Foster, the CIA agent, reveals in Part III.  More on that in a minute.

The very overt Manichean theme of man’s double needs to be highlighted first.

According to biographical accounts preserved by Ibn al-Nadim and al-Biruni, Mani received a revelation as a youth from a spirit, whom he would later call his Twin, his Syzygos, his Double, his Protective Angel or 'Divine Self'. This spirit allegedly taught him divine truths which developed into the Manichean religion. His 'divine' Twin or true Self brought Mani to Self-realization and as such he becomes a gnosticus, someone with divine knowledge and a liberating insight into things.

Other occult themes find their way into the games, like the superstitious belief that lunar eclipses are a time when evil powers awaken (the Demon Jashin is awakened at a lunar eclipse):

This is the worldview the game developers are trying to form in people, but now we must deal with the ‘revelation of the method’ moments in this series.

The CIA and the [u]nited States Army both appear in these games, and both are shown as having a heavy interest in the occult.  This is quite in keeping with reality.  The defense/intelligence apparatus is always presented outwardly as a devout defender of the land, freedom, morality, etc.  But inwardly they are very much tied up with cults, murder, mind control experiments, and so on.

Testimony before the 1977 Church Committee’s probe of the CIA hinted that, as of 1963, the scientific squalor of the CIA’s mind control regimen, code-named MKULTRA, had abandoned military and academic laboratories, fearing exposure, and mushroomed in cities across the country. Confirmation arrived in 1980 when Joseph Holsinger, an aide to late Congressman Leo Ryan (who was murdered by a death squad at Jonestown) exposed the formation of eccentric religious cults by the CIA. Holsinger made the allegation at a colloquium of psychologists in San Francisco on “Psychosocial Implications of the Jonestown Phenomenon.” Holsinger maintained that a CIA rear-support base had been in collusion with Jones to perform medical and mind control experiments at People’s Temple. The former Congressional aide cited an essay he’d received in the mail, “The Penal Colony,” written by a Berkeley psychologist. The author had emphasized: Rather than terminating MKULTRA, the CIA shifted its programs from public institutions to private cult groups, including the People’s Temple.

Like Jonestown, the Symbionese Liberation Army was a mind control creation unleashed by the Agency. The late political researcher Mae Brussell, whose study of The Firm commenced in 1963 after the assassination of John Kennedy, wrote in 1974 that the rabid guerrilla band “consisted predominantly of CIA agents and police informers.” This unsavory group was, Brussell insisted, “an extension of psychological experimentation projects, connected to Stanford Research Institute, Menlo Park.” (She went on to lament that “many of the current rash of ‘senseless killings,’ ‘massacres,’ and ‘zombie-type murders’ are committed by individuals who have been in Army hospitals, mental hospitals or prison hospitals, where their heads have been literally taken over surgically to create terror in the community.”)

Evidence that the CIA conceived and directed the SLA was obvious. The SLA leadership was trained by Colston Westbrook, a Pennsylvania native. Westbrook was a veteran of the CIA’s murderous PHOENIX Program in South Vietnam, where he trained terrorist cadres and death squads. In 1969 he took a job as an administrator of Pacific Architects and Engineers, a CIA proprietary in Southern California. Three of Westbrook’s foot soldiers, Emily and William Harris and Angela Atwood (a former police intelligence informer), had been students of the College of Foreign Affairs, a CIA cover at the University of Indiana. Even the SLA symbol, a seven-headed cobra, had been adopted by the OSS (America’s wartime intelligence agency) and CIA to designate precepts of brainwashing.

The Order of the Temple of Astarte (OTA) in Pasadena, California is a “hermetic” occult organization that practices “Magick in the Western Tradition.” The cult is led by Fraters Khenemel, a police officer, and Aleyin, a veteran Green Beret. The cult’s everyday language is unusual for a mystical order – one group schedule is laden with words like “operation,” “sixteen-thirty hours,” and “travel orders.” Demonology is among the OTA’s primary occult interests.

The police connection recalls the statement of Louis Tackwood, the former LAPD provocateur whose revelations of secret police subterfuge set off a political tempest in Los Angeles in 1973. “You don’t know,” he told journalist Donald Freed, “but there’s a devil worship cult in Pasadena. Actually in Altadena.” Tackwood alleged that the cultists were “on the LAPD payroll.”

The CIA and Pentagon cooperate in the creation of cults. The Association of National Security Alumni, a public interest veterans group opposed to covert operations, considers it a “primary issue of concern” that the Department of Defense has a “perceived role in satanic cult activities, which qualify in and of themselves as very damaging exercises in mind control and behavioral modification.”

These government agencies are also interested in ancient artifacts in this series, a theme we see today in the Middle East where many such artifacts have gone missing after the invasion of the American ‘liberators’ and their allies.  For ensample,

Colonel Metthew Bogdanos' (USMC) book, Thieves of Baghdad is the account of the official U.S. military investigation of the looting of the Baghdad Museum. While normally I would not use my site to review a book, in this case I think the subject is significant enough to warrant posting my thoughts, for in this case, there are a number of things in this book that tend to support my thesis that someone was fully prepapred prior to the U.S. invasion and occupation of that country to steal priceless artifacts - including cuneiform tablets - that contained esoteric knowledge of ancient high science that the "powers that be" wish to monopolize for themselves and to keep from public scrutiny.

The statues, which so interest the CIA in the game, at center-left; from http://www.hardcoregaming101.net/ninjagaiden/ninjagaiden2.htm, 7 March 2017

The CIA agent’s name, Foster, also puts one in mind of John Foster Dulles, whose brother, Allen, ran the CIA, and oversaw all kinds of horrible business from coups to Operation Mockingbird, and most interesting for this essay, the beginning of the mind control project MK-ULTRA (https://en.wikipedia.org/wiki/Allen_Dulles#CIA_career, 6 March 2017).

Mind control plays a part later in the first game of the series, where we find Ryu’s father Ken is under the influence of a crystal orb of some kind, and has been remade by Jaquio (Jaki Oh, King of Demons, Ryu’s main opponent in the first two games) into the Masked Devil (all of which is appropriate considering the above material on the CIA-devil connections).  Nor is this kind of mind control an inchoate thing:

Dr Jose Delgado, a pioneer of electronic brain stimulation (ESB) who was funded through front organisations by the U.S. Office of Naval Research and the CIA, stated in his book Physical Control of the Mind (published in 1969), that "brain transmitters is transmitted by way of radio frequencies."

"One of the possibilities with brain transmitters is to influence people so that they conform with the political system. Autonomic and somatic functions, individual and social behaviour, emotional and mental reactions may be invoked, maintained, modified, or inhibited, both in animals and in man, by stimulation of specific cerebral structures. Physical control of many brain functions is a demonstrated fact. It is even possible to follow intentions, the development of thought and visual experiences."

Early implants were about half the size of a cigarette filter but newer versions can be adapted to liquid crystals, injected directly into the bloodstream to lodge inside the brain. Two-way radio communication with brain transmitters has been possible since the 1950s, including voice messages and 'returned thought.'

In the December, 1980, edition of the US Army Journal, Military Review, an article by Lt Col. John B. Alexander entitled, "The New Mental Battlefield: Beam Me Up Spock", provided further insight into the technical capabilities now at the disposal of the controllers. He writes, "Several examples will demonstrate areas in which progress has been made … The transference of energy from one organism to another … The ability to heal or cause disease can be transmitted over a distance, thus inducing illness or death for no apparent cause … Telepathic behaviour modification, which includes the ability to induce hypnotic states up to distances in excess of 1,000 kilometres, has been reported. The use of telepathic hypnosis also holds great potential. This capability could allow agents to be deeply planted with no conscious knowledge of their programming. In movie terms, the Manchurian Candidate lives and does not even require a phone call. Other mind-to-mind thought induction techniques are being considered. If perfected, this capability could allow the direct transference of thought via telepathy from one mind, or group of minds, to a selected target audience. The unique factor is that the recipient will not be aware that thoughts have been implanted from an external source. He or she will believe that thoughts are original." (Emphasis added.)

We will try to have the second part posted soon.

Anathema to the Union!
Posted by Walt Garlington at 6:06 PM